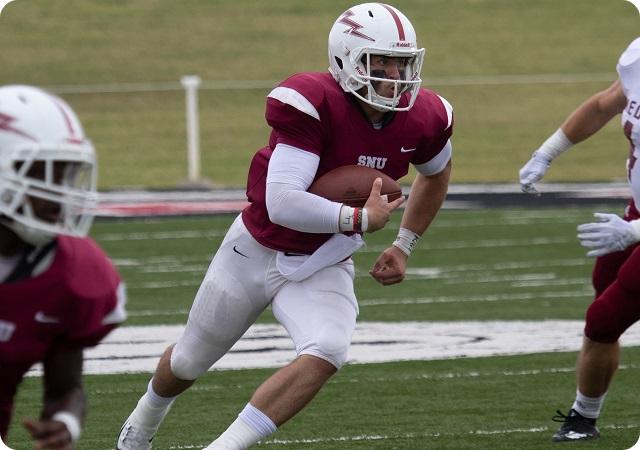 D2Football.com is pleased to announce the players of the week for week 11 of the Division II season.

Gage Porter wrapped up his remarkable season with 398 total yards and six touchdowns in Southern Nazarene’s victory over Oklahoma Baptist. Porter completed 9 of 14 pass attempts for 226 yards and four TDs. He also rushed for 172 yards on 27 carries, with another two touchdowns. Porter finished the season ranking second in the country in total rushing yards with 1,747, and first in rushing touchdowns with 27.

Chadron State defensive lineman Hunter O’Connor had a record setting day in the Eagles’ contest with South Dakota Mines last Saturday. O’Connor set a new RMAC record with nine tackles for loss in a single game. He also established a new program record with five sacks in the game (all solo), which allowed him to set a new single season record of 16 sacks. He finishes the day with 13 total tackles including 12 solo, with the aforementioned nine tackles for loss of 39 yards and five sacks.

Alex Alvarado’s 16 kicking points helped UNC Pembroke extend their game with Concord into five overtime periods. Alvarado made all four field goal attempts, with a long of 42. He was true on all four point after tries, making him a perfect 31-for-31 in 2022 season. On kickoff duty, he averaged 48.3 yards on eight kicks, with a touchback. Alvarado finishes his UNCP career in  the program’s top five in points scored in a career.

Past Players of the Week