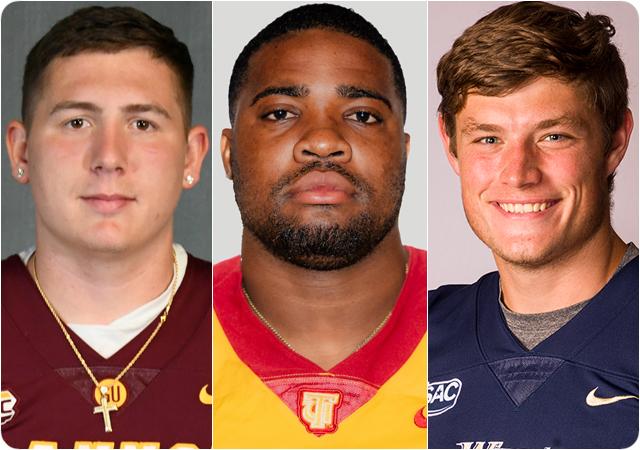 D2Football.com is pleased to announce the players of the week for week nine of the Division II season.

Kory Curtis led Gannon to one of the biggest wins in program history with a 43-36 upset of #12 IUP. It was also Gannon's first win over a ranked opponent since 2011. Curtis led the way, accounting for six total touchdowns. He completed 23 of 28 pass attempts for 342 yards, with four touchdowns and zero interceptions. He also rushed for two touchdowns, including the game winning score with five minutes remaining in the fourth quarter. Outside of his offensive duties, Curtis also punted three times, averaging 45.3 yards with a long of 65.

Davir Hamilton-Jackson led a Tuskegee defense in holding Kentucky State to just seven points in a game that decided the SIAC West division.

Hamilton-Jackson totalled 11 tackles with eight solo, three tackles for loss and two sacks. He also intercepted a pass in the fourth quarter that ended any hopes of a Kentucky State rally.

Ethan Evans excelled in all his kicking duties in Wingate's 24-21 win at rival Lenoir-Rhyne. Evans averaged 45.4 yards on eight punts. Five were downed inside the 20 yard line, including three inside the 10. His 53 yard punt late in the fourth quarter pinned Lenoir-Rhyne at their own three yard line. A turnover forced by the defense deep in plus territory then led to the game winning score. Four of Evans' five kickoffs resulted in touchbacks and he was perfect on PATs, hitting all three.