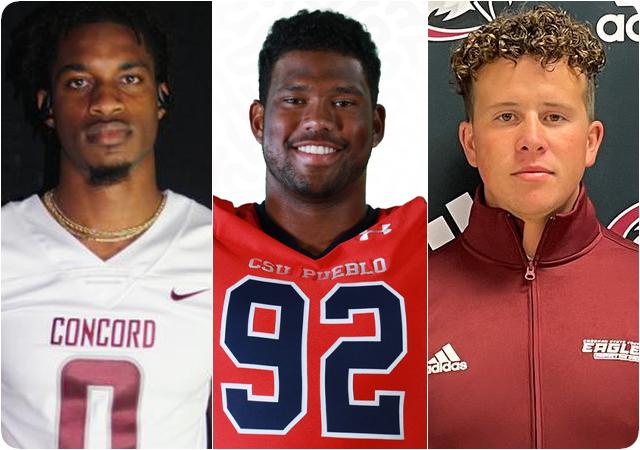 D2Football.com is pleased to announced the players of the week for week seven of the Divsiion II season.

Concord scored 68 points in last Saturday’s win over Charleston and every one of them was needed. Junior running back Thurlow Wilkins led the offensive effort with 279 yards on 27 carries, averaging 10.3 yards per carry. Wilkins scored touchdowns on rushes of 41, 39, 16 and 59 yards. His 59 yard tote with 1:44 left in the game provided the final margin of victory in the 68-60 shootout. Wilkins’ day helped Concord to a school record 735 yards of total offense.

Trey Botts lead the CSU-Pueblo defense in the Thunderwolves’ 35-11 victory over New Mexico Highlands. Botts tallied 15 total tackles with six of them being solo stops. He registered six tackles for loss, totaling 22 yards and three sacks for loss of 17 yards. All three sacks were solo.

Senior place kicker Gunnar Jones tied the Chadron State school record with a 57 yard field goal on the last play of the first half in the Eagles’ win over Adams State. Jones would add two more field goals later in the game, including another from 57 yards, equaling the record twice in the same game. For the day, Jones was 3-3 on field goals, 2-2 on PATs, averaged 58 yards per kickoff and had a 54 yard punt.  Jones’ record-tying field goals were critical points in the Chadron State’s 29-27 victory.

Previous players of the week