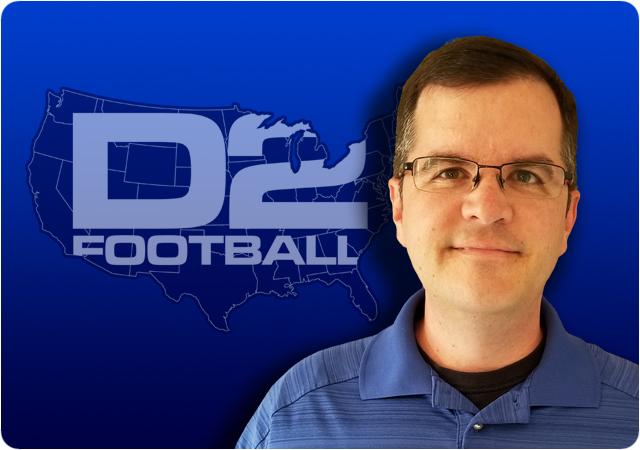 Events are changing by the day due to the ongoing impact of the COVID-19 public health crisis. Nearly every NCAA conference has announced plans for a modified fall schedule and several have suspended all athletics for the remainder of the calendar year. Below is a run down of each Division II football conference with its latest update on plans for the fall.

Five of sixteen D2 conferences that sponsor football have suspended all fall sports. Those five leagues are the CIAA, SIAC, PSAC, NE10 and GNAC. All five have announced intentions to explore shifting fall sports to the spring. A month ago, the thought was nearly laughable. Now…not so much. In some (and maybe all) parts of the country, it may be the only way to have sports in the 2020-2021 academic year. (Updated 7.27: The GLVC has suspended football and several other fall sports. A few lower contact sports will carrry on). The GLVC has already committed to playing fall sports (including football) in the spring.

I find the concept of spring football interesting to say the least. It will be an enormous challenge. With as much as six months to prepare, it is doable. Maybe not for all, but hopefully for most. The obvious challenges are facilities for practice and competition, staff limitations (specifically, atheltic training and sports communications) transportation, cost, availability of officials, media constraints, etc. But its about finding creative ways to let the student athletes play ball, so I’m all for it.

Its going to be really hard for schools in the PSAC and Northeast 10. Most members in both conferences participate in football, field hockey, men’s and women’s soccer and men’s and / or women’s lacrosse. That’s a lot of field sports to compete for practice and game space. It may be more viable in the CIAA and SIAC, which by comparison, sponsor fewer sports.

A big question still unanswered is what about the D2 football championship playoffs? First of all, at this point I don’t think we will have any Division II fall championships. I hope I’m wrong, but I don’t see it happening. If we do have a football championship, it will need some adjustments for 2020. Two conferences in region 1 and two in region 2 are out of the picture. That would mean some changes to the selection process and possibly a reduction in numbers are in order. Will that happen? I don’t know, but it would certainly seem necessary. What would those changes look like? Let’s save that for a future column. I’d like to see us to get to fall practices first.

Here is the current situation for each D2 football conference…

CIAA On July 9, the CIAA announced the suspension of fall sports and championship. The conference will explore the possibility of contesting modified schedules in the spring of 2021 for football, volleyball and cross country.

GAC The Great American Conference has announced a plan to go forward with fall sports. The start of practices will be delayed until the week of August 31, with competition set to begin during the week of September 28. Conference games currently scheduled to begin prior to September 28 will be (for the time being) skipped. Plans for rescheduling those contests will be evaluated pending final decision on Division II fall championships.

GLIAC (Updated July 27) The Great Lakes Intercollegiate Athletic Conference Council of Presidents voted Friday to play a conference-only schedule during the Fall 2020 sports season and will evaluate the feasibility of league competition on a sport-by-sport basis.

GMAC The Great Midwest Athletic Conference has said very little about its plans for fall athletics.

GNAC The Great Northwest Athletic Conference CEO Board voted unanimously on July 17 to suspend all athletic competition through November 30. The conference is exploring options for “providing meaningful seasons of competition” for its fall sports, which includes the possibility of playing in the spring.

GSC The Gulf South Conference announced it will delay the start of the fall sports season to late September or early October. All fall sports will play conference only schedules. Additional details regarding practice schedules will be announced once approved by members.

LSC The Lone Star Conference has delayed the start of fall practices to no earlier than August 24, with competition beginning no earlier than September 21. The Council of Presidents will re-evaluate prior to start of the fall season.

MIAA The Mid-America Intercollegiate Athletics Association announced plans to delay the fall sports season. Practices will begin the week of August 31 with competition beginning the week of September 28.

MEC The Mountain East Conference plans to go forward with a revised fall schedule. Practices will begin September 7 for football and September 14 for other sports. Games will begin no earlier than October 1. Games missed during the month of September may be made up in the spring 2021 semester. The conference is also developing contingencies to delay the start of competition until late October and potentially even shifting all sports to the spring.

NE10 The Northeast 10 Conference announced on July 16 that it will suspend all athletics through December 31. The conference is exploring plans to play fall sports schedules in the spring semester.

NSIC (Updated July 27) The NSIC has announced it will play an 8 game, confernce only shedule beginning September 26. There will be one overall champion and no divisional champions.

PSAC On July 15, The Pennsylvania State Athletic Conference announced it is suspending NCAA competition for fall 2020. The conference is evaluating options for moving fall sports to the spring semester.

RMAC (Updated July 27) The RMAC has announced it will delay the start of fall sports until September 18 and play a conferene only schedule.

SAC The South Atlantic Conference announced on July 24 that it will delay the start of the fall sports season until September 26. All sports will play conference-only schedules.

SIAC  On July 9, the Southern Intercollegiate Athletic Conference announced the suspension of all fall sports and championships. The possibility of playing fall sports in the spring  is being explored.

If you have questions, suggestions, comments, complaints, email me at [email protected] and follow me on Twitter @D2Chuck 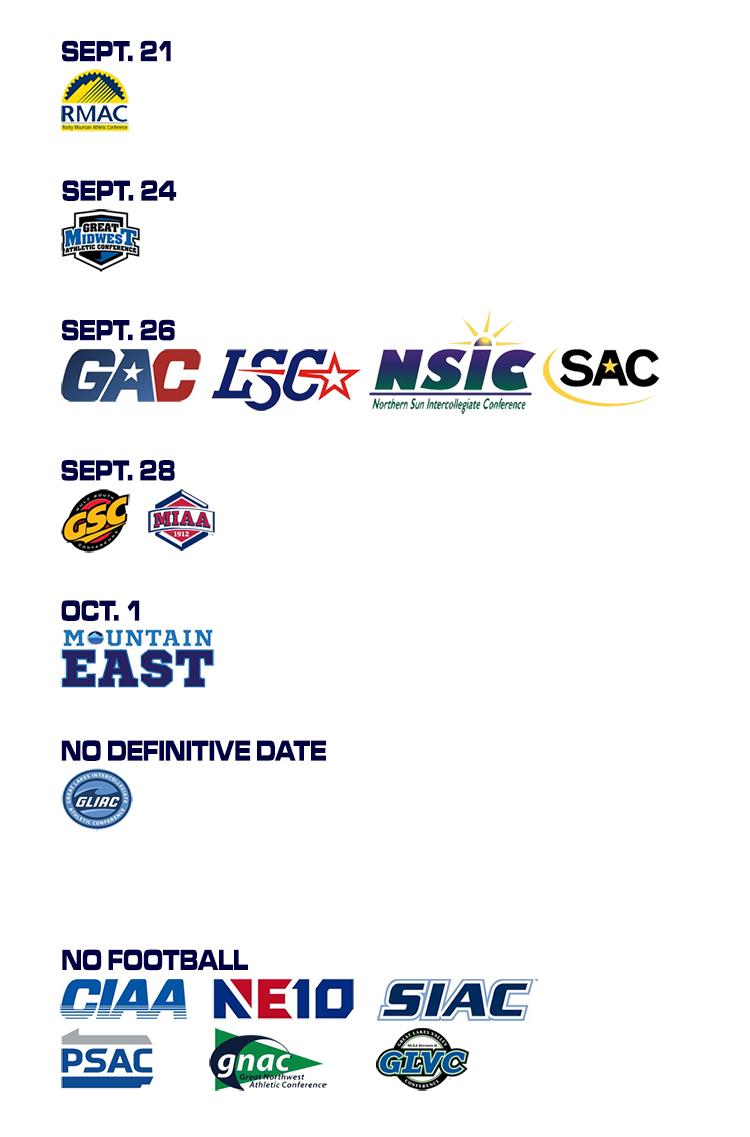