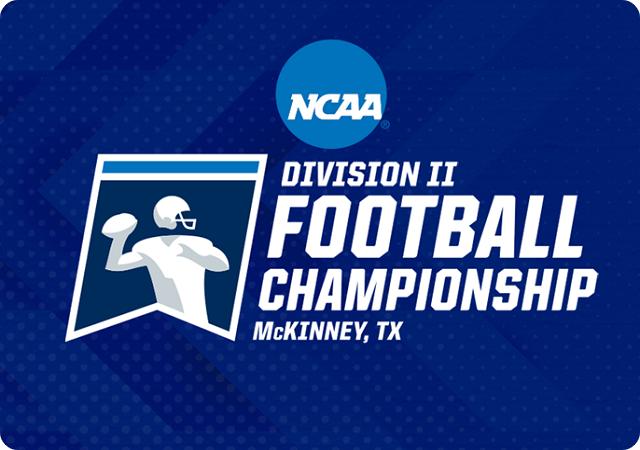 The Division II Football Championship will be here in just a few weeks. Each season brings new fans and followers to Division II and if you haven't been through a playoff season before, it might be a little confusing to follow the process and understand how the post-season field is formed. Here are the basics, and a Q&A to help you learn the details. If reading this isn't enough, check out the first few minutes of  this segment from Inside D2 Football from October, 2021.

You will see few things repeated from the bullet points above, but these are important points to stress.

Q: When will we find out who has made the playoffs?

A: The playoff field will be announced on Sunday, November 13. Prior to the selection show, regional rankings will be released following weeks eight, nine and ten. The first release of regional rankings will be published on Monday, Oct. 24. This release will list the top 10 teams in each region, however, they will not be ranked 1-10. The teams will be listed in alphabetical order. Following weeks nine and ten, the teams will be ranked 1-10 in each region.

Q: When do playoffs start and how many rounds are there?

A: First round playoff games begin on Saturday, November 19. There are three rounds in the regional brackets, followed by national semifinals and then the championship, for a total of five rounds.

A: The selection process is regional. Division II has four super regions that make up the playoff bracket. The super regions group conferences based geographic proximity. Each region will select 7 teams to make the tournament.

Q: What conferences are in each region?

Q: Do conference champions get automatic bids to the playoffs?

A: No. There are no automatic bids awarded.

Q: If there are no automatic bids, Is it possible for a conference to be shutout of the playoffs?

Q: How many wins does a team need to make the playoffs?

A: There is no set answer for this. However, there are some basic qualifications that teams must meet just to be considered. Those qualifications are:

Q: Assuming a lot of teams meet the qualifying standards, how are the top 7 determined?

A: There is a set of required selection criteria applied to compare the eligible teams. The regional selection committees apply the following criteria in no particular order:

The commmitte also has approval to consider the following:

Q: How is strength of schedule determined?

Q: There have been times when national polls have teams ranked higher than teams ahead of them in the regional rankings. How does this happen?

A: The national polls are opinion polls. There is no set criteria for how voters evaluate teams. Each voter can apply whatever metrics or analysis he or she feels is important. The regional rankings have some room for subjective analysis but it is largely a mathematical process.

Q: Who votes in the national polls and regional rankings?

A: There are two national polls. One is compiled by AFCA and tallies votes from 30 head coaches representing every conference. The other national poll is the D2Football.com Top 25. The voters in this poll are D2Football.com columnists and a few carefully selected Sports Information Directors and members of the media. The AFCA and D2Football Top 25 polls have no influence on regional rankings. The regional rankings are determined by the Division II Football Championship committee.

Q: Who is on the championship committee?

Q: How can I find out who is on the committee?

A: The current committee member assignments are listed on pages 11 and 12 of the Division II Football Pre-Championship Manual

Still have questions? You can email me at [email protected] and follow me on Twitter @D2Chuck. You can also join the chat on Inside D2 Football to ask questions and learn everything you want to know.