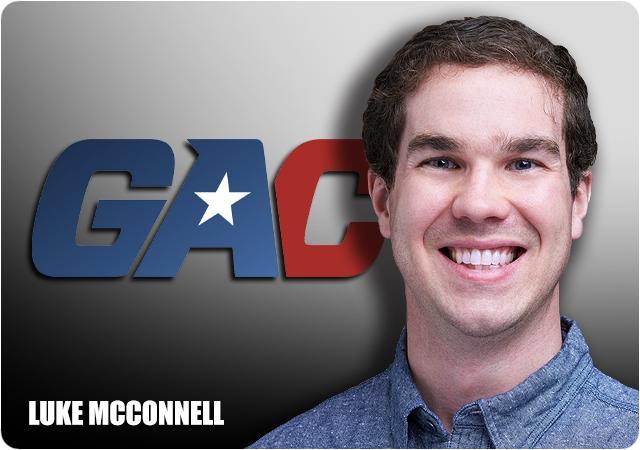 Welcome in to week seven in the GAC. Just five games remain in the season and there’s plenty of meaningful football to be played across the conference.

The biggest question for the rest of the season is just how many GAC representatives will make the playoffs. Ouachita Baptist appears to be a shoo-in with how they’ve dominated through six games, but Harding, Henderson State and potentially even East Central can hold on to hope that running the table will be enough to put them in.

Here’s a look at the conference players of the week from this past week’s games.

Without further ado, your week seven slate of games in the Great American Conference.

Harding returns home to take on a Henderson State team coming off a humbling loss on the road at East Central. The Reddies managed just 10 points against the East Central defense and things will only get tougher against the conference’s best defensive unit. The Reddies will have to figure out who starts at quarterback, as Landon Ledbetter wasn’t as effective against East Central as he has been in other games this season. Andrew Edwards has been outstanding throwing the football in three of his four starts this season, so perhaps we see both quarterbacks depending on the situation in Searcy on Saturday.

Harding continues to play well and continues to get better each week. The defense did give up over 400 yards to Southern Nazarene on Saturday, so containing the Henderson State rushing attack will be key this week. On the other side, Harding's rushing attack will be tested by the strong front seven of Henderson State. Harding won’t throw the ball much, but when they do, it will be against a secondary that has struggled this season. Big plays to the Bisons’ big receivers will be there if quarterback Cole Keylon has time to find them.

The Reddies will come in with a point to prove after last week’s disappointing loss. I expect a close one in Searcy, but I think the Bisons will be able to keep the Henderson State offense down just enough to come up with the win.

The Weevils are the next ones up in the Ouachita Baptist steamroll tour in 2022. The Tigers have been nothing short of spectacular this year, averaging 47 points and 516 yards per game while giving up just 15 points per game. They can do it on the ground and through the air. It might just be one of the best groups Todd Knight has ever assembled in Arkadelphia. TJ Cole, Kendal Givens and Riley Harms get the headlines because of the big numbers, but the defense has been quietly excellent as well.

Monticello is coming in off a tough Homecoming loss at home to Northwestern OSU last week. The Weevils have been inconsistent on offense of late and have dropped two straight games. This week is not the week to expect to get back on track. However, quarterback Demilon Brown will test the Ouachita defense, and the Weevils secondary, which is first in the conference with 12 interceptions, will try to make things difficult for Harms.

The Tigers are just rolling right now. Hard to see them dropping this one at home.

Arkansas Tech has won two straight behind a much-improved rushing attack. In the past two games, the Wonder Boys have rushed for 613 yards and eight touchdowns in wins over Southern Nazarene and Oklahoma Baptist. The Muleriders have lost two straight games and give up 220 yards per game on the ground, so there is a great opportunity for Arkansas Tech to continue finding success on the ground in this one.

Southern Arkansas continues to rotate OB Jones and Judd Barton at quarterback, but it hasn’t led to anything consistent. The Muleriders have thrown for at least 250 yards in three games and less than 175 in each of the other three. The ground game has been equally perplexing, with three games over 289 yards and three under 150. The only consistent thing about the Muleriders is the fact we don’t know what we’re going to get each week.

Winning on the road won’t be easy for the Muleriders, as they’re 0-3 on the road this season. Arkansas Tech wins their third straight game.

Well, well, well. How about the Rangers going on the road and picking up their first win of the season at Arkansas-Monticello? I must admit that was one I did not see coming. After a lot of misery, the Rangers defense stood tall and truly won the game, turning in a defensive touchdown and limiting the Weevils offense until late, when the UAM comeback fell short. NWOSU turned to Dakota Michaels at quarterback and while he wasn’t exactly efficient, he got the job done. Whether the Rangers go with him or return to Tanner Clarkson remains to be seen.

Southeastern got back on the right track with a nice win over Southern Arkansas that saw the run defense in particular bounce back in a big way. The Savage Storm entered the game last in the nation in yards per carry allowed, but did a great job against a strong SAU rushing attack. The SEOSU passing attack continues to be terrific, with quarterback Daulton Hatley and receiver Marquis Gray among the best in the nation at their respective positions.

I’d expect Southeastern to find success against the Northwestern defense, but the Rangers’ performance last week definitely changes things a bit. It’ll still be the Savage Storm, but closer than initially expected.

The psyche of the Bulldogs is the biggest question in this one. How will SWOSU respond to the 63-point, 700+-yard performance Ouachita Baptist put on them last week? The Tigers are really good, but anytime you give up a performance like that, it can be a bit demoralizing. Southwestern will have to bounce back quickly, because the Southern Nazarene rushing attack continues to roll, led by the conference’s leading rusher, quarterback Gage Porter. The Bulldogs have put up 21 sacks this season, so they have the front seven needed to contain Porter and SNU. However, we also thought the same with a similarly-sized Southeastern team, and we saw how that went.

However, if Southern Nazarene can’t stop SWOSU quarterback Tylan Morton through the air, it might not matter how much SNU can gash the Bulldogs on the ground. SNU has been quite porous defensively this year, to put it mildly, including allowing a nation-worst 62.3 percent conversion rate on third downs. The Crimson Storm have to be better in this area if they hope to leave Weatherford with a win. The Bulldogs have been fairly one-dimensional this year, rushing for just 129 yards per game this season. Will that approach change on Saturday?

To be frank, this feels a lot like the Southeastern game set up for SNU. The in-game matchups are a bit different, but if SNU can just string together a few stops, who knows what can happen. However, until we see that happen, hard to make the case for it to happen.

It should be pretty concerning for Oklahoma Baptist that the Bison managed just 13 points against a good but not great Arkansas Tech defense last week. East Central rolls into Shawnee as the hottest team in the conference not named Ouachita, having won four straight games. Quarterback Kenny Hrncir is playing extremely well, having been responsible for at least three touchdowns in each of the last four wins. But it’s the defense that gives the Tigers a great chance to extend the win streak to five. The Tigers held a strong Henderson State offense to just 342 yards and 5.5 yards per play in a 31-10 win last week.

The Bison continue to struggle on the ground, both offensively and defensively. They rushed for just 27 yards against Tech and gave up 331 to the Wonder Boys. For the season, the Bison are averaging just over 100 yards per game on the ground while giving up 271 yards on defense. In this conference, that’s a losing formula. Dayton Wolfe was back at quarterback for the Bison on Saturday after Aidan Thompson handled things well against Harding two weeks ago. We’ll see who gets the start on Saturday as the Bison try to find any semblance of momentum for the second half of the season.

East Central is rolling and OBU is definitely not. The Tigers keep it going on Saturday.