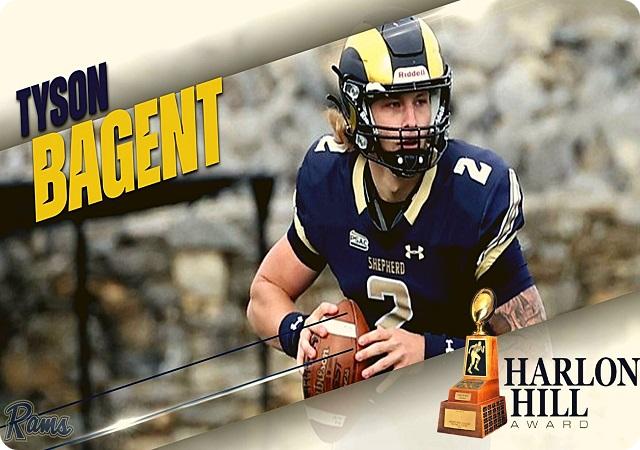 Coming off a standout season in 2019, Bagent was a front runner for the award all year. He led Shepherd to a 13-2 overall record, including three playoff wins and a berth in the national semifinals. At the conclusion of the regular season, Bagent ranked first in the nation in passing yards per game and passing touchdowns and was in the top five in completion percentage and efficiency.By the end of Shepherd’s post-season, Bagent had passed for exactly 5,000 yards, which led Division II and currently ranks fourth among all NCAA quarterbacks. His 53 touchdown passes led Division II and places third among all NCAA players. His season was highlighted by ten games with more than 300 passing yards and nine games with four or more touchdown passes. Bagent completed at least one touchdown pass in each of Shepherd’s 14 games this fall. Since the conclusion of the regular season, Bagent has been named PSAC East division offensive player of the year, First team Super Region One and First team All-America by AFCA.

Beyond the statistics and post season honors, Tyson Bagent’s 2021 season may best be remembered for Shepherd's run to the national semifinals and the late game heroics the Rams pulled off in the second and third rounds of the playoffs. In the second-round meeting with Notre Dame College on November 27, Shepherd had just 0:28 seconds to respond to a late scoring drive by the visiting Falcons. It proved to be more than enough time as Bagent connected with Josh Gontarek for the game winning score from 23 yards out with just 0:02 remaining. One week later, the game winning score came after time had expired. In the Super Region One final, The Rams trailed Kutztown 28-24 when the ball was snapped for the final play of the game. Bagent eluded pressure and nearly went down before launching the ball towards the end zone. The clock hit triple zeroes before the ball was snagged out of the air by Alex Wetzel who outjumped multiple defenders for the game winning “Hail Mary” touchdown. You can re-live the remarkable game winner here.

The trophy will be presented to Tyson Bagent at the Little Rock Touchdown Club annual awards banquet on January 14, 2022.