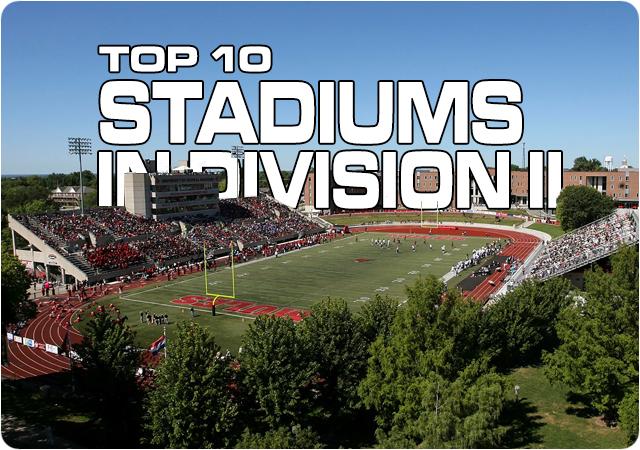 In the 20-year history of D2Football.com, one topic has been discussed more than any other during the offseason – ranking the stadiums.

Like the teams in the division, there is a wide range in the quality of stadiums.

Factors in determining the rankings include evaluating the press box side of the stadium, the opposite side of the stadium, end zone facilities and seating, and video replay.  Consideration was also given for the setting and intimacy as well as modern and convenient facilities for fans.  Distractions sucks as tracks surrounding the field also factored into the decisions.

On this countdown, only stadiums belonging to the school were considered.  So Tom Benson Hall of Fame Stadium in Canton, Blue Wahoos Stadium in Pensacola, or even McKinney ISD Stadium in McKinney were not considered.

Is your stadium in the middle of a beautiful setting or has unique features but not on this list?  Keep an eye out for future countdowns where we discuss those as well.

But for now, it’s the Top 10 stadiums in Division II.

At a cost of $12 million, Johnson Stadium Opened in 2006 and is the best stadium in the SIAC.

It can sit 10,000 fans and the configuration allows for expansion to hold 15,000.  In 2019, it saw the addition of artificial turf and a new digital scoreboard that is the largest in their league.

Modern facilities on both sides of the stadium are easily accessible by fans and the modern press box includes guest services, suites, classrooms in addition to the serving the needs of the media. 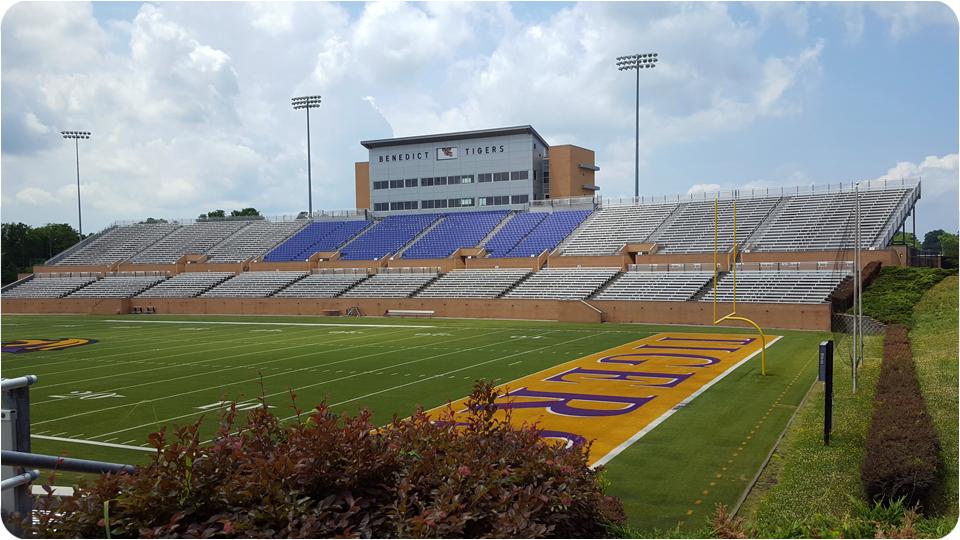 One of the bigger stadiums on the list, football was first played on the site in 1928 and received a major upgrade in 1995.  The renovation of Walton Stadium set the standard for many renovations and new construction that followed and probably initiated the arms race in the MIAA.

The press box side renovations were followed with upgrades of a video board in 2012 and complete renovations of the east side stands in 2013 with modern concessions and restrooms located underneath.  The horseshoe stands to the north were removed and replaced with a grassy hill where fans can sit.

West Georgia went from somewhere near the bottom of the Gulf South stadium list all the way to the top in 2009 with the construction of University Stadium.

Another of the larger stadiums in the country, the facility seats around 10,000 fans as part of an athletic complex built on 250 acres purchased by UWG.

A wide footprint for a stadium is made more intimate by the athletics administration building at the end of the south end zone.

The Wolves have made the playoffs four times since the construction of the stadium, including advancing to the semifinals in 2014 and 2015. 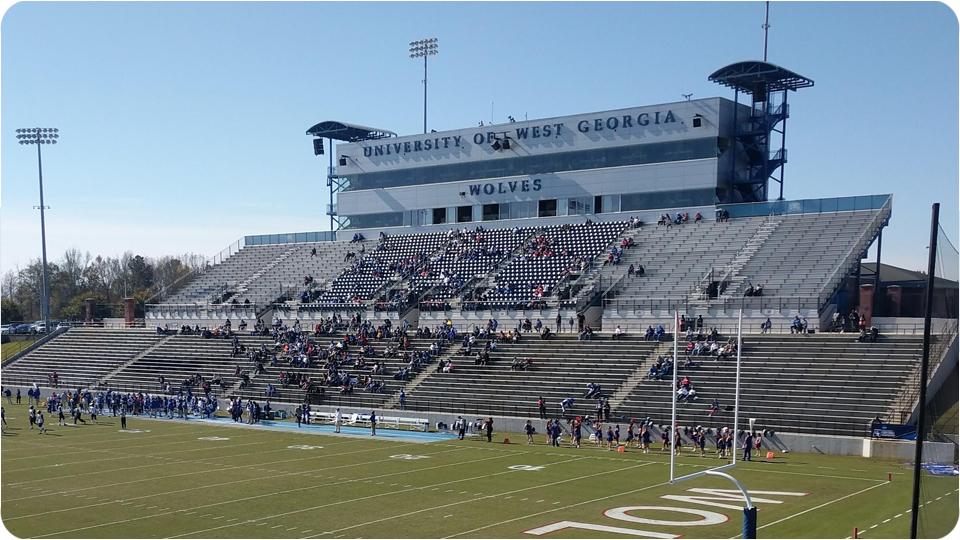 The Bearcats have been playing football at this location since 1913, and before 2000 it looked like it.

In 2000 the school replaced the side opposite the press box with new stands that are nicely adorned and contain concession and restroom facilities located conveniently underneath.  In 2003, the west side was transformed in the style of Central Missouri.

It was one of the first Division II facilities to have a video replay board.  It was replaced with a much improved version in 2014.

Overall, it is a fine home for the six-time national champions. 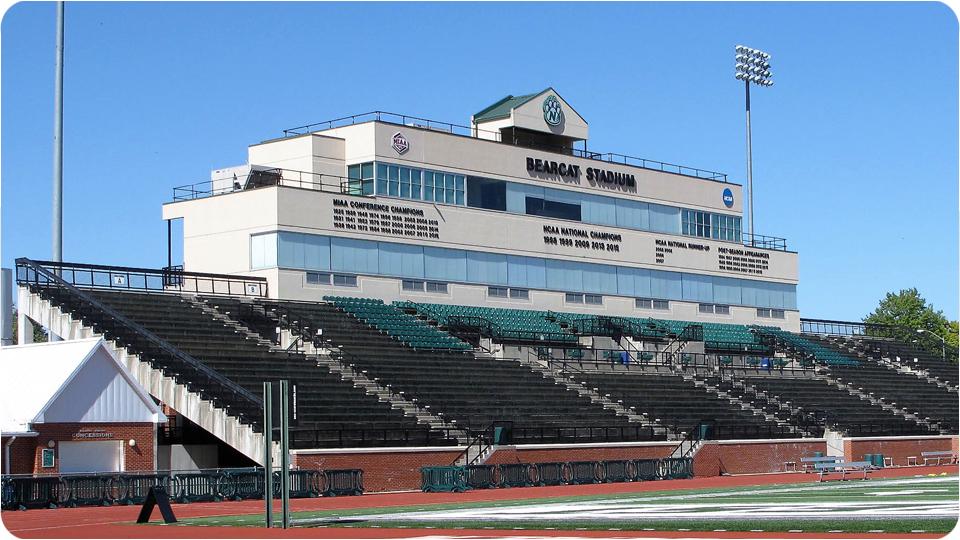 For quite a while after being built in 1979, Spratt stadium was a below average Division II stadium.  However, those days are gone.

Renovations in 2009 and 2015 have transformed the stadium into one of the nicest in the country.  In 2009, new bleachers on the north side were replaced with a much more modern version and in 2015, the press box and suites were upgraded.  Soon afterward, one of the largest video boards in D2 was added.

While the distance to the sideline is still a negative, the stadium has come a long way in a short amount of time. 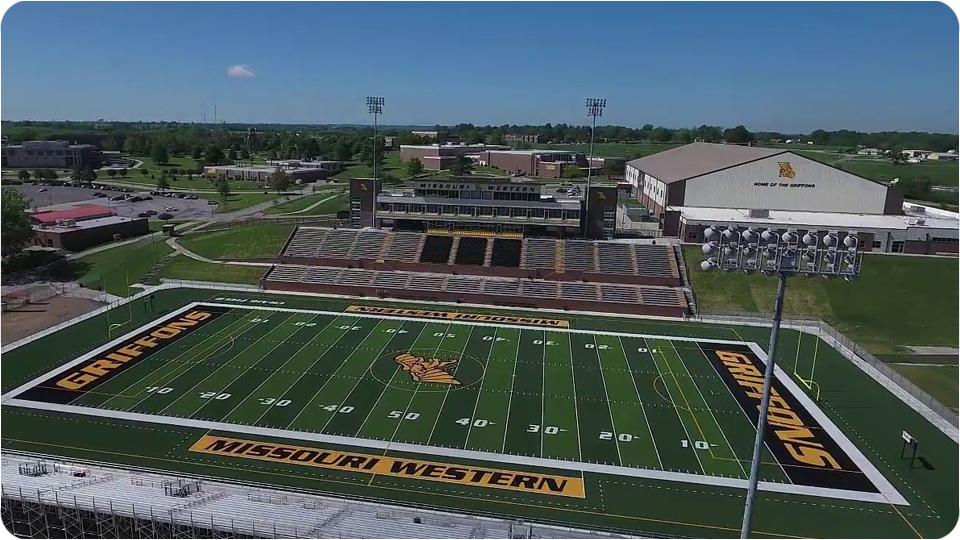 The newest of the standard style of stadiums.

Kirkeby-Over was built in 2009 and has seating for 6,500 fans including 2,200 chair back seats.  Some fans choose to sit on the nicely manicured grass berms outside the end zones.

Built on the site of the former practice field, the stadium features nine suites and modern media facilities and is named in the memory of the parents of donor Kari Hall.

Although the facilities for visiting fans need to be improved, the fact that the stands are closer to the field than the other stadiums of a similar style is why we nudged it ahead of some of the others. 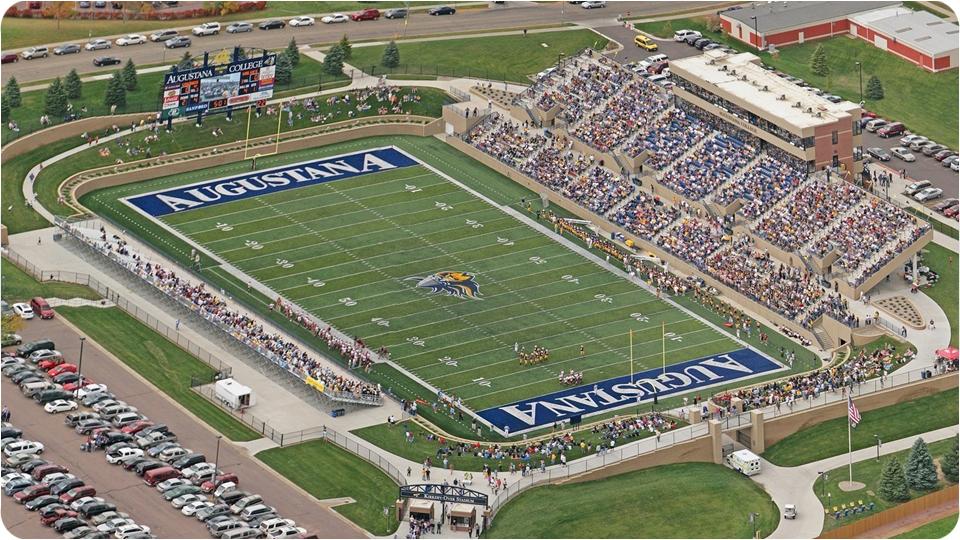 The home of UCO football since 1954, the stadium has undergone renovations that have made it one of the nicest in Division II.

In 2003, Wantland added new stands on both sides of the stadium plus a three-level facility that includes club seating and media facilities.  That gave the stadium a capacity of 10,000.

What really sets this stadium apart from the others of a similar design is the most attractive end zone facility in the country.  The coaches’ offices and the team’s locker room are located in the Sports Performance Center, not to mention space for meetings, film study, and academic performance.

This is the first of three stadiums that are different then the rest on the list.  It’s also the perfect example of how to transform a stadium.

Lubbers was built in 1973 but has undergone constant renovation since 2011 when GVSU lowered the field, removed the track and expanded seating to provide a more intimate setting for football.  The expanded seating brings the capacity to 10,444 but the stadium has the ability to expand to 20,000 seats if the need arises.  The student end zone section provides the best seating of that type at our level.

The 2016 renovation featured a video board that is the largest in D2. 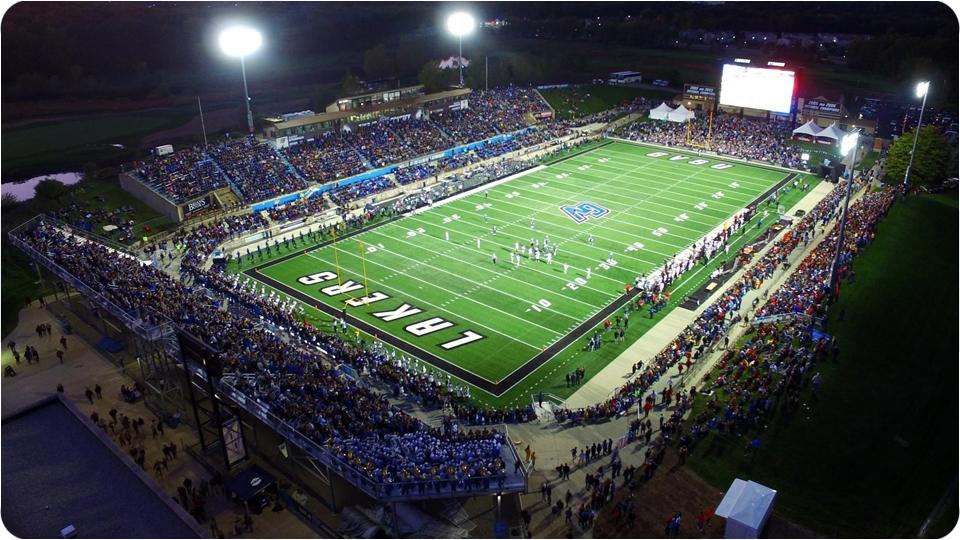 For many years, this was the best stadium in the country.  Built in 1923, it is now named for the  legendary PSU coach.

The double-decker setup on the opposite side of the pres box is the nicest in the country and it’s hard to beat the stadium’s suite setup.  There are 16 and they are located on both sides of the facility.

The stadium was updated in 2001, 2006 and 2008, which saw the installation of the first video board at CSS named the “Jungletron” – one of the largest in Division II.

It’s been a great location for the Gorillas.  They have won 73 percent of their home-games since 1924 and two national championships as a member of Division II. 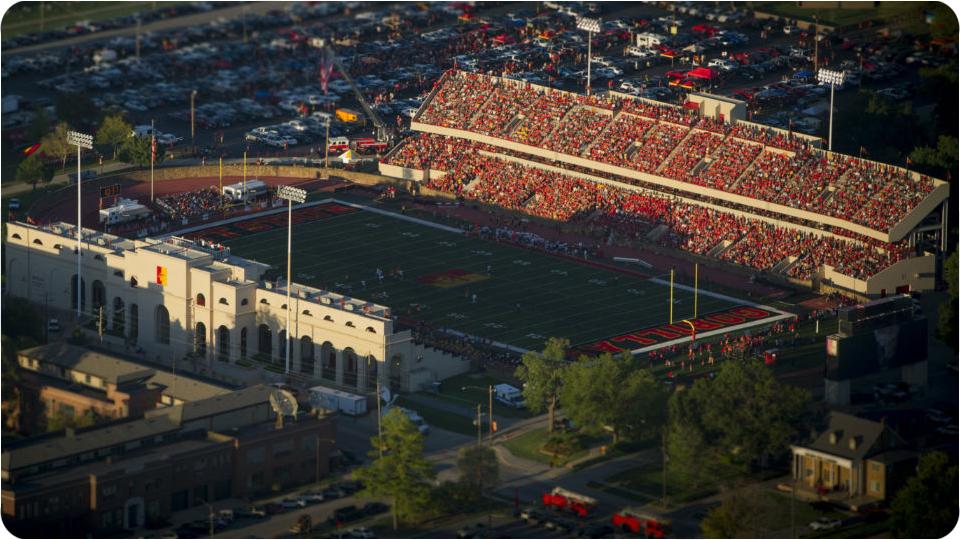 The newest stadium in Division II is also earns the honor of being named the best stadium.

The permanent seating holds 8,500 fans and is balanced between both sides of the stadium.  Buffalo Stadium can handle a total of 12,000 people when they utilize standing room areas and the green areas beyond the end zones.

For those that prefer a little more luxury and convenience, there are seven suites which also feature seating under the cover of the upper deck.

A tremendous upgrade from Kimbrough Memorial Stadium which West Texas used to rent, it will take great effort and investment to knock Buffalo Stadium off the top spot on our list. 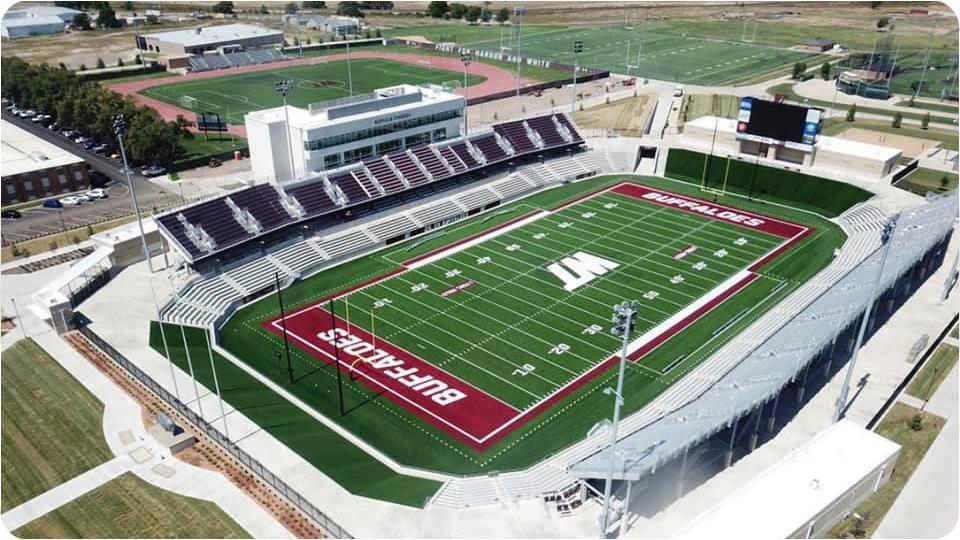