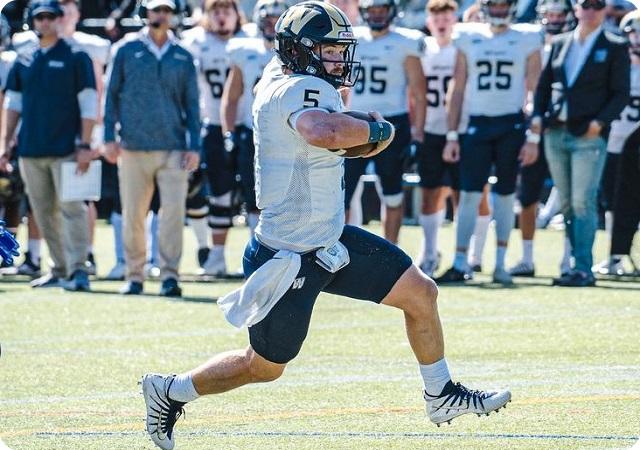 Week Seven delivered all the excitement and drama we hope for and more. Here are the headlines, news and notes from a big weekend of Division II football.

Lakers win Anchor-Bone Classic in One vs. Two matchup

For the first time since 2015, Grand Valley State has won the Anchor-Bone Classic, defeating rival Ferris State. The game was played in front of a record crowd of 12,661 at Top Taggart Field. The Bulldogs had a 21-10 lead at the start of the fourth quarter and on most days, a two score lead is safe with the Ferris State defense. But the Lakers dug deep and pieced together two scoring drives in the final ten minutes of the game to end Ferris State's 43 game regular season winning streak. It's really hard to boil this game down to a few sentences because there was a lot to take in. But here are a couple of things that stood out to me. Both teams did an exceptional job of neutralizing some of the opponent's biggest threats. The Lakers offensive line was superb all day and minimized the impact of Ferris State's Caleb Murphy, one of the top defensive players in the country. Murphy leads the nation in tackles for loss and sacks, but finished the game with just 1 TFL, half a sack and no solo stops.  Defensively, GVSU took away the QB running game and Ferris really didn't have much confidence in going to it very often, with only a handful of designed runs called. For their part, Ferris State took Grand Valley's playmakers at receiver out of the game. Jahdae Walker and Cody Tierney combined for just one catch. But the Lakers were able to use a host of players in the run game and it worked. As a team, they netted 223 yards on the ground and picked their spots very wisely with the QB running game. We will have a lot more to say about this game on Inside D2 Football on Sunday night but I will say in print this was definitely the best football I've seen this year in Division II. There are some other good teams out there, but at this point in the season, Grand Valley and Ferris State and the two best teams in the country. Ferris State saw several streaks come to an end on Saturday, but if they refocus and think big picture, they will probably have another shot at Grand Valley in December. The GLIAC title has most likely been decided but Ferris State can still defend their national title.

Speaking of beating a rival for the first time in a long time, Virginia Union came out on top in an OT thriller at three-time defending CIAA champs Bowie State. The Panthers entered the game as one of the top scoring offenses in D2 but had just three points on the board at halftime. A Jada Byers TD run early in the third quarter gave Virginia Union a spark they desperately needed and they would not trail again for the remainder of the day. This was a day for the big time players to show what they were made of, and they delivered. Jada Byers, the nation's leading rusher, ran for 277 on 30 carries, averaging 9.2 per rush. Bowie State QB Dion GolattJr. countered with 303 passing yards, hitting 30 of 44 attempts. Bowie State's standout pass rushers Joshua Pryor and Jordan Ellison combined for five sacks. The OT win in  a nearly four and half hour game was a huge victory for Virginia Union. For the past few years, the road to the CIAA title has gone through Bowie and the Panthers have now conquered that challenge. They still have to get through their biggest rival Virginia State at the end of the regular season. That won't be easy but the Panthers are in the drivers seat to make it to the title game for the first time since 2007.

For the second time this year, Benedict ruined homecoming for one of the SIAC's top programs. The Tigers took down defending SIAC champs Albany State 24-20 in front of ASU's homecoming crowd of nearly 12,000 people. The win likely settled the SIAC East division and almost assures Benedict a spot in the championship game. While the final was close, Benedict controlled the game from the start and never trailed. The Tigers were able to post 406 yards of offense against a traditionally powerful Albany State defense. QB Eric Phoenix had a stand out performance, completing 22 of 28 passes for 253 yards and a TD. The Tigers still have three games to play before they can think about a championship appearance, but those three opponents are currently 0-7, 2-4 and 0-6.

The Henderson State defense held Harding to just 294 total yards and 236 on the ground (if you understand Harding, 236 is good number for a defense) in a one-point upset on Harding's home field. The Harding defense was even better, limiting Henderson State to only 214 total yards but the Reddies were opportunistic. Their first two drives of the game were their best, covering 55 and 79 yards. Neither finished in the end zone, but the Reddies got field goals on both possessions. A short field set up by a turnover allowed the Reddies to get their only TD of the game on a 29 yard drive. Tristan Heaton was a difference maker hitting three field goals, including the go-ahead score from 46 yards out that provided the winning margin, 15-14.

Emporia State upset UNK and the MIAA standings with an authoritative 44-21 win. The victory secured the program's firs road win over a ranked opponent since 2016. UNK scored first but Emporia immediately responded and then owned the rest of the day. The Hornets outgained the Lopers 553 to 310. Billy Ross Jr. had his best day as a Hornet, rushing for 150 yards and two scores. Corey Thomas was a weapon as well, catching seven passes for 110 yards and a TD. The win moves Emporia State into a tie for second place in the MIAA and the UNK loss gives Pittsburg State a two game lead on the field.

Other news and notes from around the country

Elsewhere in the ranks of the unbeaten, Angelo State, Ouachita, Pittsburg State, Delta State, Ashland, Shepherd, IUP  Sioux Falls and Texas A&M-Kingsville took care of business. Angelo State and Texas A&M-Kingsville will play this coming Saturday in what will likely be the game of the week. And we can't forget Davenport. The Panthers prevailed again in a close one, beating Wayne State 47-43. The Panthers are 6-0 and play Lincoln (Ca) out of conference this week.

Saginaw Valley State bounced back in a big way after losses to Grand Valley and Ferris State. The Cardinals defeated previously unbeaten and ranked Indianapolis 38-14. The Cardinals won in all three phases of the game. The defense was exceptional, holding Indy's Toriano Clinton to just 45 yards on 18 carries. It's going to be really hard for Saginaw to work their way into the playoffs in a stacked super region, but its not impossible and they are playing like one of the top challengers in the SR 3.

Things keep getting worse for Valdosta State. The Blazers were torched by Mississippi College's rushing attack. The Choctaws put up a school record 598 rushing yards , averaging an incredible 9.8 yards per carry. Valdosta did counter with 622 total yards of their own, but the Choctaws were able to keep their offense on the field, use up time and finish drives. Valdosta State did not force a single punt in the game. The Choctaws turned the ball over once and were stopped on downs late in the game. With the win, Mississippi College is tied with West Florida for second place in the GSC at 3-1 in league play.

Concord and Charleston decided to let things go completely crazy in their Saturday afternoon affair at Concord. The Mountain Lions led 35-33 at the half and then both teams decided to repeat another half just like it. Concord won by a final of 68-60, in regulation. Charleston looked like they might have an edge heading into the final period, but Concord owned the fourth, outscoring the Eagles 27-10 . Obviously, there many offensive superlatives. Both starting QBs finished the day just under 400 yards. Concord's Jack Mangle at 399 and 6 TDs, Charleston's Javonte Howard had 392 and 4 TDs. Thurlow Wilkins rushed for 274 and 4TDs for Concord.

Quincy and McKendree played a similar kind of game with the Hawks winning a shoot out, 63-62 in OT. Quincy put up an incredible 40 first downs in the game, and passed for 469 yards. All of those cam from Tionne Harris who was 35 of 50 with 3 TDs. Tremayne Lee added 192 rushing yards and found the end zone four times. The game was decided in the bottom half of the first OT. McKendree scored to match Quincy's TD but instead of attempting a PAT to extend the game to a second OT, McKendree went for two and the win. The Hawks stopped the play and earned the program's first ever win on McKendree's home field.

Wingate rallied from a 21-0 fourth quarter deficit to beat Limestone 28-21 in OT. The Bulldogs were shut out for 50 minutes but scored three touchdowns in the final 9:30 of regulation to extend the game and then won it in the first OT.

Ashland kept their perfect season going, escaping with a 14-7 win at home over Ohio Dominican. Quarterback Austin Brenner did not play in the first half for reasons unknown and the impact was obvious. The Eagles were shutout in the first 30 minutes. But the defense kept them in it and completely shut down the ODU offense in the second half.  Ashland forced six consecutive Panther punts in the second half with only ODU's final possession ending in a turnover on downs. Close call for the Eagles, but a good team victory on a night the offense struggled to finish drives.

They haven't been mentioned much this year, but Tusculum is 6-1. They've won with offense, they've won with defense and they are definitely looking like the favorites to win the SAC Mountain Division. It's still a couple of weeks away, but they have a critical road game at Mars Hill on the horizon.

Western Oregon pulled off an upset for the second week in a row. After losing three in a row, the Wolves have now beaten Central Washington and West Texas A&M to move to 2-3 in LSC play.

St. Augustine's got their first win of the season, 28-25 over Johnson C. Smith.

Wheeling is very quietly a contender in the MEC. The Cardinals beat Frostburg State on Saturday to improve to 5-2 overall and 4-2 in the conference. They have cross-town rival West Liberty this coming weekend and then a big matchup with first place Concord on October 29.

That's a wrap for this week. Be sure to join us for Inside D2 Football Sunday night at 8pm, eastern.