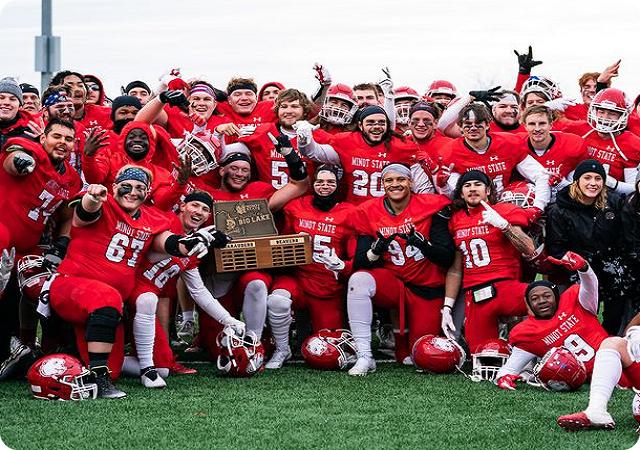 I know I keep saying it, but if the past month has taught us anything, it would be that finishing a season unbeaten is really hard. Delta State won the first nine games of the season and was a favorite at home against West Georgia, who entered the game 6-2. The Statesmen seemed to be able to keep West Georgia at arm's length most of the game and built the lead to as much as 18 points in the 4th quarter. But the Wolves never went away. The final three offensive drives of the game for West Georgia covered 75, 91 and 65 yards. All three resulted in touchdowns. It was a phenomenal rally from West Georgia but also a painful collapse for Delta State. When you have an 18 point lead at home in the fourth quarter, you have to win. The defense obviously lost its way in the fourth quarter but this comeback also does not happen without a costly fumble by the offense on the UWG side of the field while Delta State was attempting to use up the clock. It was a very painful loss for the stunned home crowd and will drop Delta State from the top spot in the super region two rankings. West Georgia QB Harrison Frost passed for 503 yards and 4 TDs in the win. The Wolves led for only five seconds in this game.

Gannon, #10 Slippery Rock and #16 IUP all won on Saturday. Each finished the PSAC West division schedule at 6-1, resulting in a three way tie at the top of the division standings. The PSAC's tie-breaker criteria looks first at head-to-head competition, however, that does not eliminate any of the teams. IUP beat Slippery Rock, Slippery Rock beat Gannon, Gannon beat IUP. The next criterion is results against divisional opponents not involved in the tie. All three have the same results against those teams. The third tie breaker is overall record in conference mandated schedule, including crossovers. This eliminates Gannon. Slippery Rock and IUP won their two crossover games while Gannon went 1-1. With Gannon eliminated from the tie, the process starts over again to break the tie between IUP and Slippery Rock. IUP beat Slippery Rock head to head on October 1. That resolves the three way tie and IUP will play in the PSAC championship game. The west division hosts all week 11 games in the PSAC this year, meaning IUP will host east division champ Shepherd. Slippery Rock will try to secure their place in the SR1 playoff field with a home game against Kutztown while Gannon will host Shippensburg.

#5 Ferris State handed #19 Davenport their first loss of the season. The Bulldog defense limited the red-hot Davenport offense to just 183 total yards, with only 24 rushing. Ferris State's starting quarterback Mylik Mitchell, who did not play last week, split snaps with Carson Gulker but had a tough day throwing the ball. Regardless, it was good to see him out there as there had been some whispers that he may not appear again in the regular season.

Heading into the final week of divisional play, the SAC lucked into having a game in each division that would result in the winner clinching the division and advancing to the championship game. In the Mountain division, Mars Hill won at home over Tusculum by a final of 34-27. The Lions trailed for less than two minutes in this game and won it with good defense and big plays from the passing game. Quarterback Jimmy Urzua attempted only 14 passes and completed 10, but those completions netted 263 yards and two TDs. Malik Laurent was a difference maker, rolling up 185 yards and two touchdowns on just four receptions. Newberry punched their ticket to the title with a win at #21 Wingate. The Wolves defense kept Wingate out of the end zone until the final minute of the game when it was too little and too late. The final stats are entirely misleading. Newberry did not convert a single third down in the game, was outgained in total offense 412 to 292 and held possession for only 16:29. But they did get 184 yards from Mario Anderson and a special teams TD that permanently swung momentum in their favor.

The schedule worked out brilliantly in the GLVC. Since all seven teams play each other, there is no championship game. However, the league title will be won outright next week when Truman State and Indianapolis meet. Both won on Saturday to extend their conference records to 5-0 and overall records to 8-1. This one will be featured in the Week Eleven preview column, but let's just say I'm already looking forward to it.

It was so strange that West Florida and Valdosta State played one of the most competitive and entertaining games of the day and it wasn't even on the radar. Of course this is because Valdosta State isn't having the season we expected from them, but this game ended up being everything we would have expected three months ago. There was a lot of good and a lot of bad for both teams, but in the end it came down to a two point play in the bottom half of the first OT. PeeWee Jarrett got the ball over the goal line for the win but he took a lot of hits on the night carrying the West Florida offense.  Despite the loss, it was a much needed gut check performance for a Valdosta State defense that has had a bad year. The win, coupled with the Delta State loss moves West Florida into a tie for first place in the GSC standings.

Since we're into playoff mode, we're going to approach the notes by region, focusing on teams contending for the postseason

News and notes by super region

Super Region One rankings should be pretty stable for another week. The top eight teams all won and the only team currently ranked that lost was Bentley. The Falcons were ranked 9th in SR1 this past week but with a third loss, should be out of the picture when the new rankings come out. The shocking thing about the result is who Bentley lost to. The Falcons were upset by American International, who entered the game 0-8. Kutztown would have seemed the likely team to replace Bentley, but the Golden Bears lost to West Chester by 19 points at home. There will be a three loss team in the top 10, so it could still be Bentley or maybe Kutztown enters the rankings afer a loss. Tiffin likely has the highest SOS among three loss teams but has fewer victories to their credit.

Super Region Two was a little bit bonkers as Delta State's loss will not be the only result to shake up the rankings. #3 Wingate, #6 Tusculum and #8 Albany State also lost.  All three of those teams had one loss entering the weekend thus, are two-loss teams now. All three of the opponents they lost two are also two loss teams so there is going to be an SR4-type traffic jam of teams with similar records. Head to head results will get very interesting in this region. Fort Valley State's win over Albany State is especially interesting as Fort Valley's regular season is now complete. They could end up right on the bubble for a playoff spot and with that head to head win, probably bumped their rivals from Albany out of the mix. And don't forget Fort Valley has a head to head win over Tuskegee which will come in really handy if 'skegee takes a second loss in the SIAC championship game. One thing that should be easy to predict is Benedict climbing to #1. The Tigers ran their record to 10-0 with a 54-21 win over next door neighbor Allen University. Fayetteville State is interesting. They're in the same position they were in last year where they must win the CIAA championship to have a chance, but its not a given that it would be enough to make the top seven. Limestone probably needs too much help to make it, but they have head to head wins over both teams competing in the SAC championship, so there is hope for the Saints.

Super Region Three had little drama as the only team currently ranked to take a loss was Davenport. That loss came to the #3 team in the region. Its possible we will see some shifting as SOS adjusts, etc but its probable we will see the same ten teams in the SR3 rankings on Monday. The top four of Grand Valley, Pittsburg State, Ferris State and Ouachita Baptist should not change. Davenport may drop a spot or two, but the balance of the list of Truman State, U Indy, Harding, Emporia State and Northwest Missouri should see minimal movement.

In Super Region Four multiple contenders suffered losses. Augustana entered the weekend as the highest ranked three loss team but will be out of the picture entirely after suffering their fourth defeat in the last six weeks. Sioux Falls may hang on to a top 10 spot, but the Cougars lost their third in a row, this time, to Wayne State. Expect to see the Wildcats move up a spot. Top ranked Angelo State was pushed by Central Washington. The Rams trailed at halftime and did not take the lead for the first time until the final minute of the third quarter. But they did outscore the Wildcats 22-3 in the second half. Central Washington was tenth in the SR4 rankings but this is their fourth loss which likely drops them from contention. Eighth ranked Texas A&M-Kingsville got locked into a thriller with Midwestern State but came out on the losing end, 41-37. The Javelina's were in the red zone at the end of the game but ran out of time and plays for a game winning score. The loss drops them to 5-3 against D2 competition and out of the running for the postseason. A name to watch for in this region may be CSU-Pueblo. The Thunderwolves' playoff hopes were written off weeks ago but SR4 is a wild west show. A three loss team will make the playoffs, possibly more than one. CSUP may end up the most qualified three loss team in the mix.

A couple of other random notes...

Minot State, Morehouse and American International earned their first wins of the season. AIC got the huge upset over Bentley, Morehouse defeated arch-rival Clark Atlanta and Minot defeated UMary at home. The Beavers may have a  decent shot at riding the momentum into a season-ending two game win streak. They play at Concordia St. Paul next week, who remains winless for the season... Southern Nazarene won for the fourth time in seven weeks. A Gage Porter rushing TD with just 0:07 remaining provided the game winning points in a 49-44 win at Southern Arkansas...Millersville beat PSAC East rival Bloomsburg for the first time since 1999 (a game yours truly was at). The Marauders have turned their season around, winning four of the last six games.

We still have so much to resolved in the final week of the season. Be sure sure to tun into Inside D2 Football for our projections on what the updated regional rankings will look like. We'll be live at 8pm, eastern on Sunday night.